If an individual retiree's drug costs are submitted to CMS' RDS Center for multiple applications, either for the same Plan Sponsor or a different Plan Sponsor, coordination of the retiree cost data across the different applications is not required.

The following examples illustrate how cost data is coordinated for one particular retiree in a UBOI where there is a change in Vendor mid-year.

Henrietta Jones is a retiree with claims managed by both Vendors. She is enrolled in a single UBOI. Vendor A submitted aggregated costs on 4/2/2012. These costs were included in payment request #1 submitted to CMS' RDS Center on 4/4/2012. The "Gross Costs" table (Example D-1) displays Ms. Jones' claims history for the months of January 2012 through April 2012. 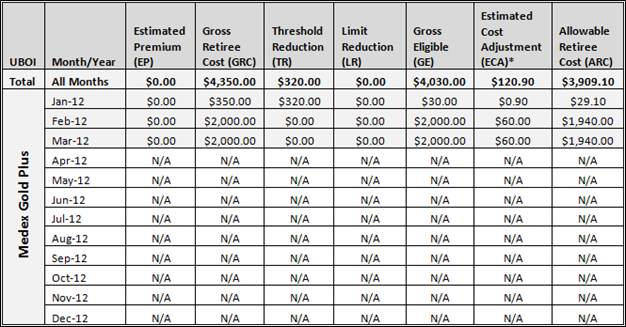 Note: The Estimated Cost Adjustment column displays a percentage of Gross Eligible Costs. In this example, it is assumed a 3% adjustment is being applied. The methodology for calculating Estimated and/or Actual Cost Adjustments may vary in accordance with CMS Retiree Drug Subsidy Guidance: Rebates and Other Price Concessions . The cost of the prescription filled in April was not reported to CMS' RDS Center because the claim was not yet paid.

On 7/5/12, Vendor A submitted aggregated costs for plan months January through June 2012. Aggregated costs for the July and August 2012 plan months were submitted by Vendor B on 8/7/2012. The second payment request submitted on August 9, 2012 included costs reported by both Vendors.The next five examples display Ms. Jones' claims history and resulting cost summaries for the months of January 2012 through August 2012 from both Vendors.

Based on the aforementioned claims in Example D-3, Vendor A would furnish the following summary in Example D-4. 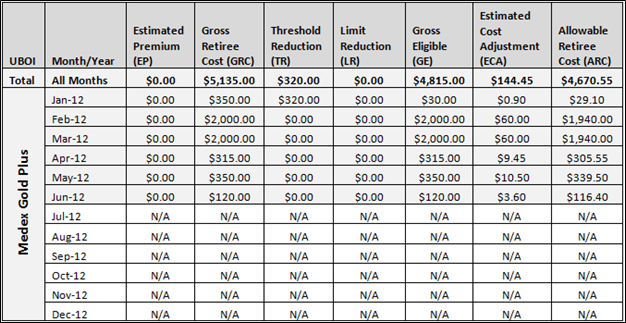 Example D-6 shows summary cost data from Vendor B that has not undergone the required cost coordination with the Vendor A data. 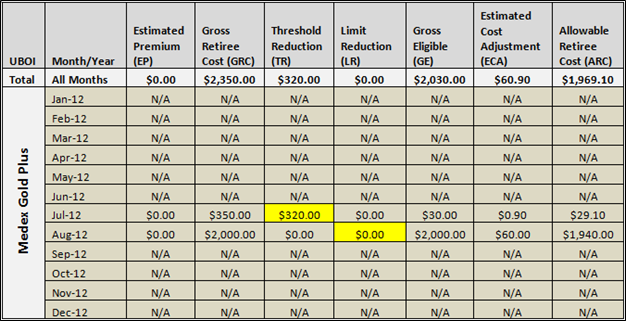 To resolve this issue, a Cost Reporter needs to aggregate the combined data from both Vendors, or Vendor B needs Vendor A cost data for months 1-6.

Example D-7 shows the corrected summary cost data that should be used to build a payment request. 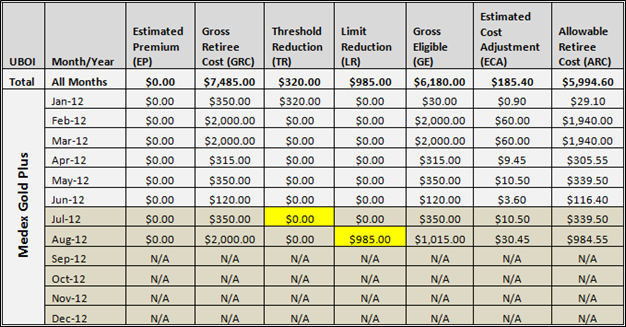 The Vendor A & B "Summary Cost Data" (Example D-7) reflects the aggregated data. Vendor A satisfied the Threshold Reduction in January; therefore, Vendor B does not need to satisfy it again in July. The July cost data was corrected, and $0 was entered for the Threshold Reduction because more than $320 in Gross Retiree Costs across the application had already been incurred and paid on behalf of Ms. Jones.

The Plan Sponsor's plan year is from 1/1/2012 to 12/31/2012. The Cost Threshold for 2012 is $320, and the Cost Limit is $6,500. The Plan Sponsor is submitting payment requests on a quarterly basis and is reporting costs by manual data entry through the RDS Secure Website. The Plan Sponsor has one retiree that is covered under two Benefit Options for the same time period. Payment request #1 was submitted to CMS' RDS Center on 4/1/2012. The following "Gross Costs" tables (Examples E-1 and E-2) display Mr. James' claims history for the months of January 2012 through April 2012 for both Benefit Options—Benefit Option RX Regular and Benefit Option-Special CL Retirees. 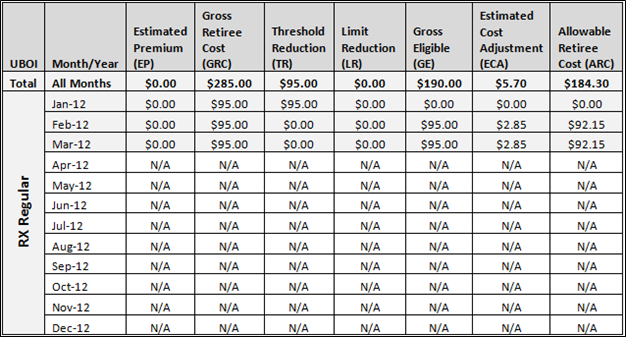 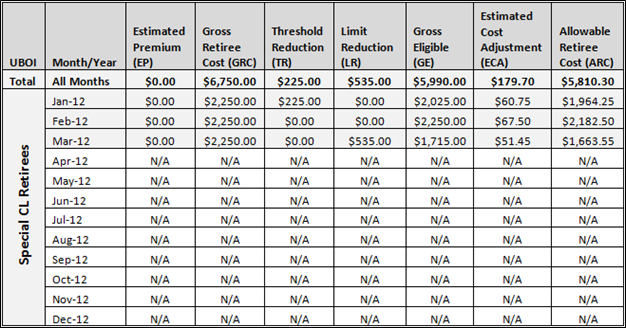